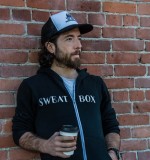 Seth,  originally from Seattle,  Washington, has been teaching yoga for five years, and practicing for 16 years.  He has studied yin yoga with Bernie Clark and Sarah Powers, Ghosh lineage with Esak Garcia, Vipassana meditation with senior teacher  S.N Goenka, and iRest, yoga nidra with Richard Miller.

Seth was first introduced into yoga when he was 14 years of age through the wisdom of his parents, after a second brain surgery in 2003.  The style was a form of Qi Gong using Reiki principles, channelling energies in the body to stimulate healing and physical and mental well-being.  At the age of 18, Seth was introduced to Bikram yoga, this time more as a form of physical exercise. Bikram yoga also had tremendous benefit on long sustained nerve damage.  In 2013, a third brain surgery ushered him to change careers from the welding and fabrication industry into yoga – the moment he awoke in the hospital after the operation he knew the way forward would only come through yoga.

In 2014, almost exactly a year after his last operation,  he attended Bikram teacher training in Khao Lak, Thailand. Afterward, he travelled and taught  yoga in Australia, India and numerous cities in the USA. Seth volunteers his time on a regular basis with non-profits and other groups providing yoga to people with disabilities as well as at-risk youth.  As a complement to his yoga practice, his alternate ego a street performer, dressing up as a pirate and entertaining crowds at parades, festivals and other community events. Seth’s style is that of strength through compassion, freedom through discipline.

💭 Are you dreaming of the Yelapa Yoga & Wellnes

Halfway through August, which means there are just

How are you practicing today, yoga friends? ✨ T